Because Maria Montessori believed that learning is a sensorial experience (which research now confirms) she created what is known as “Sandpaper Letters” – letters made from sandpaper and mounted onto wooden tiles.  The tiles are pink (for consonants), blue (for vowels) and green (for phonograms).

Today, many early childhood vendors sell “tactile” letters, understanding that as children feel the shape of the letter, they begin to understand how the letters are formed and build muscle memory.  Their tactile and visual senses also work together to enhance their ability to recognize and memorize the letters. 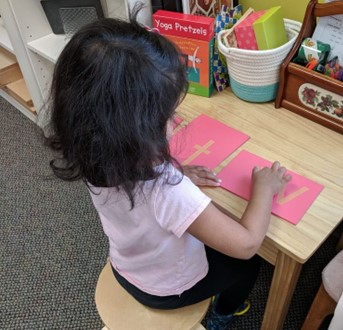 When children work with Sandpaper Letters, they have already been introduced to the phonetic sounds of the English language through classroom “Sound Games”.   They are now ready to associate the phonetic sounds with the symbol (letter).  When a child is developmentally ready to learn the letters (usually between the ages of 3 and 4), they can learn them all very quickly (even in as a little as one month)!

The child will first begin to “write” the letters by using his finger to write them in a sand tray.  We do not move to the use of a pencil until a child has developed the fine motor skills necessary for pencil grip and control, so the sand tray is an excellent prewriting tool.  Mistakes are easily “erased” by gently shaking the tray until the sand becomes level once again.   The child will next practice forming letters on a chalk board before moving to using pencil and paper!

The Sandpaper Letters are almost always introduced in a one-on-one presentation through a Three Period Lesson.  This method of presentation is used for many of the materials in the Montessori classroom, and includes: 1) naming, 2) recognition and 3) recollection.

Name.  First, the teacher will select three letters, and place them on the table or mat.  She will then choose one and name the letter.  “This is an ‘a’.  Now I will show you how to write ‘a’.”   The teacher will trace the letter with her fingers, again saying, ‘a’.  She demonstrates this three times, and then she invites the child to do the same thing.  Once this is done, she will repeat the process with the second and third letters.

Recollect. The teacher will now point to a tile and ask the child, “What does this letter say?” which prompts the child to recollect the phonetic sound that accompanies the symbol.  Sometimes, the teacher will play the “Knock, Knock” game – she will turn over each of the letter tiles, then say, “Knock, knock, who’s there?”  She will flip it over and then the child responds with the phonetic sound of the letter.