At Sonnet Montessori we are dedicated to the Montessori philosophy, the care and the education of children. Individual growth and independence are fostered. The teaching staff provide personal attention, helping each child to progress at his/her own rate. The children learn to respect each other, their environment and begin to understand the importance of peace. 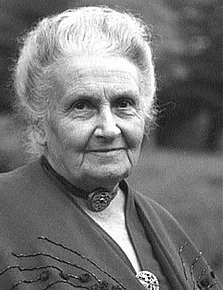 The Philosophy of the Montessori Method

Maria Montessori believed that children learn their best by doing things for themselves. The children are given the opportunity to learn basic knowledge and skills through their own interests and hands-on experience.

Children are encouraged to take responsibility for their actions and develop their self esteem. They learn to trust their own ability to think and solve problems independently.

The Montessori teacher’s priority is to help the child to help himself.

The Montessori method of teaching young children was developed by an Italian educator and physician, Dr. Maria Montessori. She was born in 1870 in Italy, and was the first woman to receive a medical degree.  She later joined the medical staff at the university’s psychiatric clinic. She discovered and proved that these children were capable not only of passing the required school examinations, but also of taking care of themselves and their environment.

Later, Montessori began to think that her methods would prove even more effective with students of normal intelligence. She opened the first Montessori school, called the Casa dei Bambini (Children’s House), in 1907. The school was located in the worst slum district of Rome and the class consisted of fifty children between two and five years old. Montessori soon discovered that the elder children took a pride in taking care of their school. They enjoyed helping with the younger ones and they wanted to learn.

Her school received overnight acclaim; conservatives appreciated the calm respectable behavior of the little children, along with their love for work. Liberals applauded the freedom and spontaneity.  Today, nearly 100 years later, her schools continue to thrive and expand, a tribute to her inspirational insight, which has helped change the course of childhood education.

The International Montessori Council has more details on the life and work of this remarkable woman.